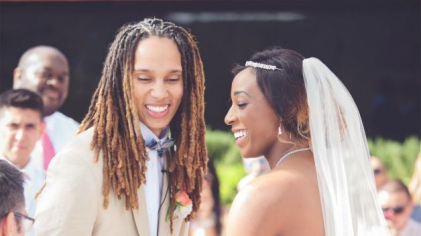 Over the last few months, we have watched the soap opera called the “Brittney and Glory Show” play out in the media. Once a story about a same-sex couple openly celebrating their love for life, basketball and each other, it has quickly turned into what appears to be a turbulent relationship. As someone who loves the sport of basketball and actually appreciates the idea of people being comfortable with their self and who they love, it honestly pains me to watch WNBA stars Brittney Griner of the Phoenix Mercury and Glory Johnson of the Tulsa Shock fall apart before our very eyes.

The question is, what makes the “Brittney and Glory Show” so interesting to the media?  Besides the reality of how social media and sensationalized journalism become overly involved in sharing the private lives of celebrities, it’s the drama that violence brings to their otherwise normal relationship.  The truth is that until the domestic violence arrest of both Brittney and Glory, we knew nothing more than they were engaged to be married. So, let me tell you straight, Read More

This site uses Akismet to reduce spam. Learn how your comment data is processed.

Sharea is a licensed clinical social worker with years of success in helping clients recover from anxiety, depression and low self-esteem. She is also a highly skilled Small and Non-Profit Business consultant. Through her skill building small businesses, she has a 100% success rate in helping individual’s realize their dream of starting or expanding their business. View all posts by Sharea Farmer, LCSW